"Conflict. As the world tethered on the brink of anarchy, a new hope arose. An elite international taskforce charged with ending the war, and restoring liberty to all nations. Overwatch. Soldiers. Scientists. Adventurers. Oddities. Guardians who secured global peace for a generation. Under its steadfast protection, the world recovered. And today, though its watch has ended, its soaring ideals of freedom and equality will never be forgotten."

在这之后得几年，守望先锋被转变成一个国际维和部队。守望先锋获得了新的资源和资金，在国际上具有巨大的影响力。在之后的数十年，它致力于维护和平，Overwatch was transformed into an international peacekeeping force.[5] New resources and funding were given to the unit, giving it far-reaching global influence.[4] Over the following decades, it helped to maintain peace, inspiring an era of exploration, innovation, and discovery,[1] its range of research including space exploration, medical research.[4] and climatology. In this particular regard, a series of eco-watchpoints were established to monitor the planet's changing climate.[6]

Overwatch grew into a global institution,[2] and new agents were recruited.[4] Those that grew up during this period are referred to as the "Overwatch Generation," as they were given a legion of heroes to look up to.[4]

Overwatch maintained a global communications network,[7] and possessed one of the most advanced armories on the planet.[5] New agents were brought into the organization as existing ones retired.[3] It carried out operations against the terrorist group Talon[8] and the ninja Shimada Clan. In the case of the latter, to its knowledge, it successfully dismantled it.[9] It took a militaristic approach to maintaining this peace however, which generated some internal tension.[10]

Twenty years after its founding,[4] Overwatch's influence waned,[1] and the organization came under suspicion of corruption and sedition.[2] A series of allegations were made against the group, including negligence resulting in high-profile mission failures; corruption and mismanagement; weapons proliferation; human rights abuses; and more.[4] Protests broke out, the people claiming that Overwatch was the source of the world's turmoil.[11] A special UN committee launched a lengthy and highly secretive investigation into the claims. As the UN investigation proceeded, Overwatch's Swiss headquarters was destroyed in an apparent accident. Among the casualties were Morrison and Reyes. The UN steadfastly maintained that there was no foul play behind this event, but anonymous reports indicate that a rebellion tore the group apart from within. On one side was Morrison, determined to hold together what remained of Overwatch. On the other side was Reyes, whose agenda remains unknown to this day. A battle raged between these men deep within Overwatch's base. At some point, their fighting triggered an explosion that destroyed the facility, killing both of them (supposedly), and numerous others. Angela Ziegler, head of Overwatch's medical research, commented in a UN hearing that the outcome was inevitable—Reyes and Morrison had drifted further and further apart, as Reyes had remained bitter that Morrison had been given the position of field commander instead of him.[4]

The UN committee, coupled with the loss of its headquarters and key members, were the two death knells that signaled the end of Overwatch,[4] as the group gave into the pressure[2] and it was eventually disbanded,[1] thirty years after its founding, left in disgrace,[2] its agents now the target of derision and suspicion in the media.[4] The Petras Act deemed any Overwatch activity illegal, and liable to prosecution.[12]

In the five years since, mystery remains as to the nature of Overwatch's fall (at least within the general population). Suspicions exist that someone took it over to its detriment. But since its end, the world has become a darker place.[3] The group continues to be memoralized however.[13] Additionally, some former Overwatch members attempted to "get the band back together.[7]

Overwatch bases were raided by a mysterious individual known only as Soldier: 76, who recovered technology and incapacitated, but never killed, those assigned to watch over the installations. Olympia Shaw, through anonymous contacts within the UN, was given the classified UN reports that detailed the true nature of the destruction of its headquarters, and the role Morrison and Reyes had played within the blast. She concluded (correctly) that Soldier: 76 was indeed John Morrison.[4]

Talon operatives conducted a raid on the abandoned Watchpoint: Gibraltar, hoping to gain access to the Overwatch agent database. They were foiled by Winston, who initiated an agent recall. Agent Lena Oxton immediately responded.[12] The two went on to foil an attempted heist of Doomfist's gauntlet by Reaper and Widowmaker.[13]

Overwatch apparently re-organized itself into a recognised unit; it was called in to protect Hal-Fred Glitchbot as he came under attack by anti-omnic forces.[14] 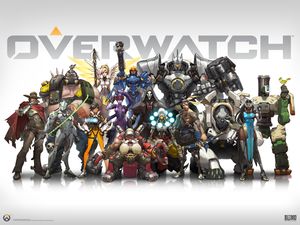 Overwatch championed the greatness of individuals, regardless of their point of origin.[3] Known members include:

Pharah's mother is also known to have been a member.[15] Members faced mandatory retirement from combat operations once they reached a certain age (late 50s at the latest).[2]